I have a vast array of useful equipment at my workbench as well as some planned additions, currently I have the following tools 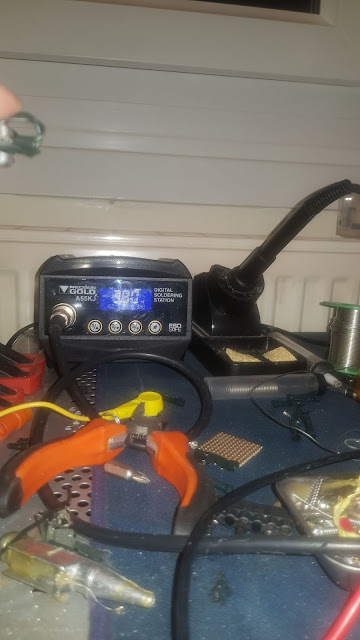 I have owned this for a number of years, it was purchased from Maplin (which sadly ceased trading after going bust) and has served me well, only needing the iron replaced twice, fortunately as it is a cheap Chinese product parts are still widely available on eBay for it as well as Rapid Electronics in the UK who sell this same soldering station under the 'Atten' brand, currenly using awful lead-free solder but I plan to transition back to lead based solder as it is more reliable. My main and trusty meter, and rated up to 750V AC, or 1kV DC in its voltage ranges, 20A AC and DC in current ranges, resistance measurement up to 20MΩ, continuity and diode test, temperature measurement with a thermocouple (though I may need to replace it), transistor test, capacitance test up to 100µF, and a hold function.

It makes an appearance in quite a few of my electronics videos, and has proven itself, and the battery was only changed from the original a few months ago, the old battery is used currently as a crude LED tester as it is way down on voltage now (4V from 9V).

This was also a Maplin purchase as they sold a few UNI-T meters, they're still available from other outlets though

This is also another Maplin purchase, part of a kit that came with a few leads, a bonding plug with conductive yet plastic earth pin and non-conductive plastic live and neutral pins, and a wrist strap, in the Maplin catalogue the kit was claimed to be approved by British Telecom (these days their Openreach division) for use by field engineers, this has served me well for computer and electronics repairs of many kinds, it is the dark blue mat seen in the videos on my desk, the yellow plug seen in the extension lead on the camping lantern video is the bonding plug, though I had disconnected the cord from it at the time, the cord to the bonding plug can be seen in the picture of the soldering station.

I bought this to try and calibrate my iron against some sort of reference as my thermocouple for my multimeter was pretty much written off doing this, it uses the same basic thermocouple though instead has it in an upside-down Y configuration, the tinned tip of the iron is placed on the thermocouple and the temperature taken, then if needed the iron is calibrated to match.

The thermocouples are available as replacement parts in packs of 10, mine was supplied with such a pack as well as a cheap PP3 battery though usage won't be too high, and although it says "lead free" I suspect that's more the construction as leaded solder is going to make no difference in the reading and I will be reverting back to leaded solder very soon all being well as lead-free solder is terrible and I used the leaded stuff back when I was at school.

Obtained from an amateur radio event, didn't come with any probes though I found one in the rest of the things and it was demonstrated with a piece of wire in one of the channels, due to its size it doesn't live permanently on the workbench 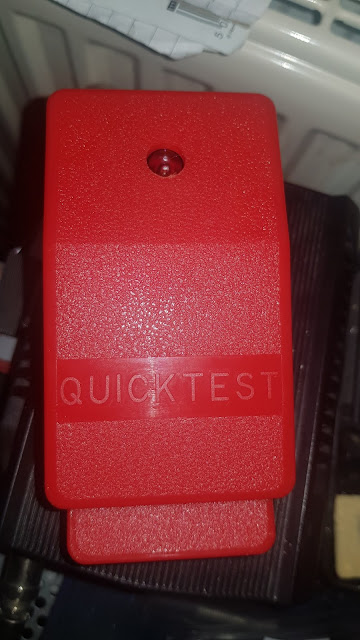 The Cliff Quicktest QT1 is a device that allows temporary connection to the mains (or an isolation transformer providing mains voltage) for test purposes of items not fitted with a plug, it is not ever intended for permanent connection and plugs must be fitted for anything to be permanently or semi-permanently connected to the mains (in the UK all products sold with a flex are fitted with a type approved plug).  The instruction leaflet that came with this and the markings inside the lid make it clear that the device is not for permanent or semi-permanent connections.

It has a neon lamp to signal when it is plugged in and the power is on, swinging the lid down connects the power to the terminals

This is essentially a bayonet cap lampholder, capable of taking a 100 watt tungsten lamp or equivalent in CFL or LED, fitted to a flex with bare wire ends, this allows it to be used in one of three ways
Though I'll probably not do the third way as the Quicktest can be plugged into meters like the HOPI anyway, the second method of use will probably be used to test the USB port on the dodgy camping lights from China for mains voltage, for general testing of lamps this will be connected to the Quicktest, for incompatible bulbs such as Edison screw lamps an adaptor will be used, polarity markings will be made for adaptors for these bulbs to avoid the screw thread becoming live and posing a safety risk as the holder is non-polarised though the flex is, the flex itself was salvaged from a failed glue gun, it is within rating for lamps however would only be used for short periods 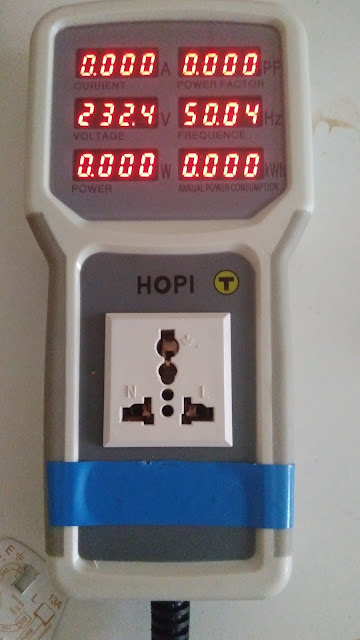 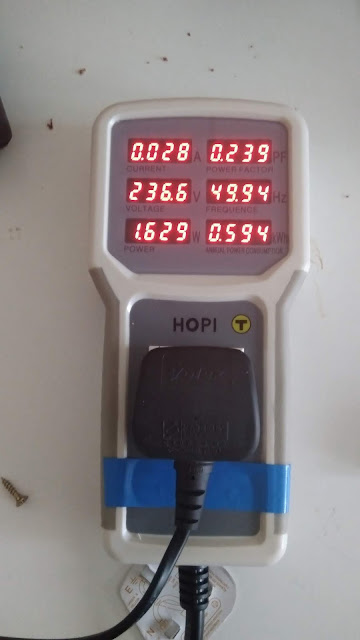 The HOPI HP9800 is a 20A rated power meter, mainly aimed at testing lamps though it can test any load to some extent, it displays current, power factor, line voltage and frequency, power in watts and annual consumption in kWh, it has a universal 'death-daptor' style socket and speaker terminals unsuited to mains voltages (which I removed from mine for electrical safety and to allow UK plugs to connect properly) and some units have a USB port, it also came with an Edison screw lamp test lead, adaptors for small Edison screw lamps and GU10 base lamp and some wires for other lamp base style.  Clive from YouTube channel 'bigclivedotcom' has one of these which makes frequent appearances, often described as the 'flickery HOPI' due to its use of multiplexing in the displays and the camera picking up the flicker, the unit came fitted with a Universal European plug however this was cut off and a BS1363 plug fitted to the unit.

I picked this up from the same Amateur radio event as the Oscilloscope, it has a quirk in that it does not display the voltage correctly from USB sources though the voltage is still within USB tolerances and it does display a current reading when a load is connected, it appears inside to be based on a microcontroller of sorts

I have additional items planned to bring in too, these are:

Given that it can sometimes be impractical to break a circuit temporarily to measure current with a normal multimeter or dedicated ammeter, I require a clamp meter and as I've already had good results with my UNI-T UT58C I figured another UNI-T meter would be a wise choice, hence this one, these are widely available online