Museum of electronic and electrical deathtraps

Here you will find a collection of some very dangerous electronic and electrical equipment that really is best not being powered up... because it could result in injury or death.

I made a video on the 7th November 2019 featuring the first 4 'exhibits', it is below if you'd like to have a watch or you can watch it on YouTube 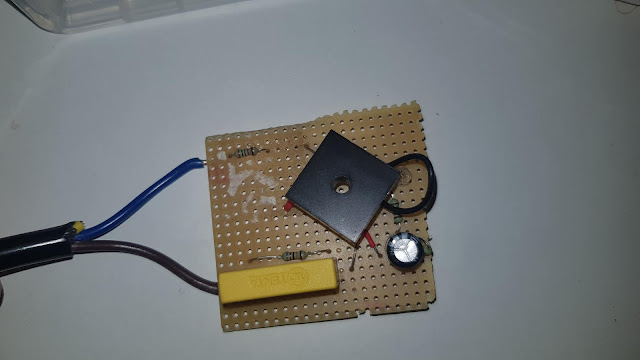 I built this spur of the moment and filmed a spoof public safety video about it, I was taken by surprise that it actually worked so had to re-record the second part, the plug, though not a danger in of itself is very old and has a 3A fuse that is probably of similar vintage and the plug pins are not sleeved as it pre-dates that revision of BS1363, all this drives is a single onboard warm white LED.

Also note the ground wire is cut off the flex, capacitive droppers usually only require live (line/hot) and neutral (return).

Assembled from junk box parts, don't build this yourself as it is quite dangerous involving mains voltages. 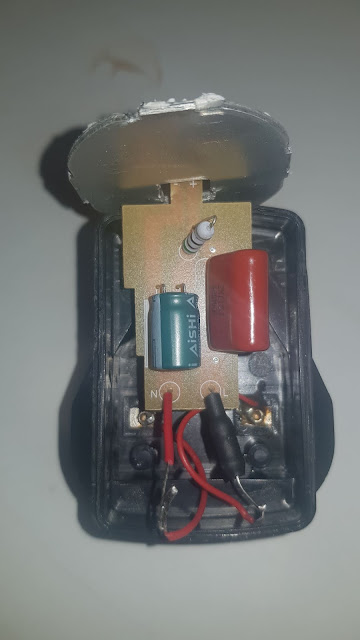 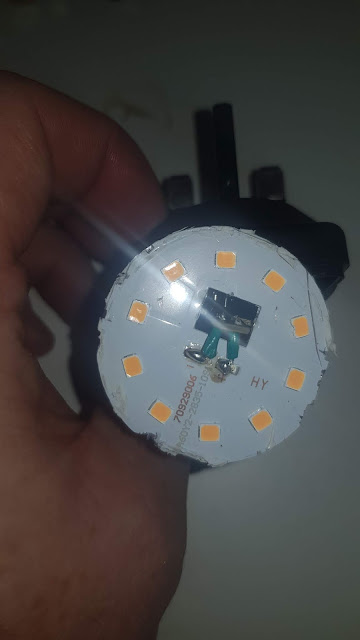 I disassembled the bulb to make another spoof public safety video on cheap LED lightbulbs that contain the deadly capacitive dropper, not having any other way of connecting it to the mains I connected it to the plug face of a failed two-way radio charging adapter, the lamp powered up but as it has exposed live wiring it's pretty much more deadly than what it was to begin with. 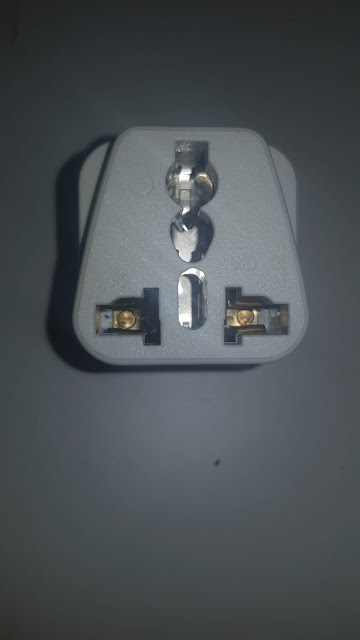 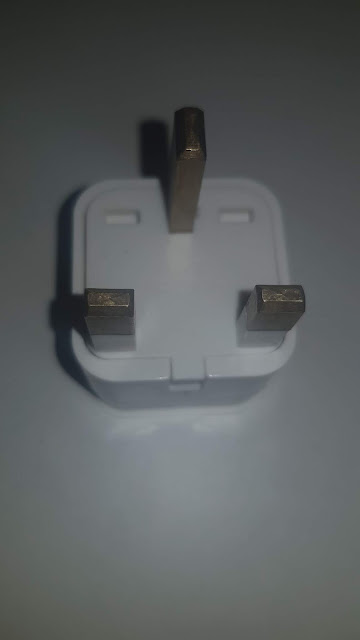 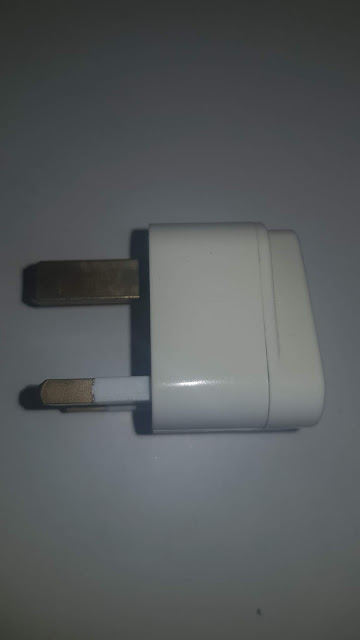 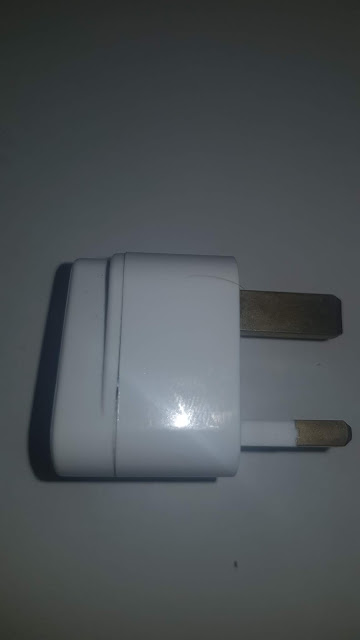 Clive from YouTube channel "bigclivedotcom" refers to these things as "death-daptors" and for pretty good reason, they will take any kind of plug with the potential to put incorrect pins into incorrect holes and bypass all the safety provided by BS1363, they always ship with Chinese products however I obtained this one with a two-way radio I purchased from a British supplier at an Amateur radio event, as it bypasses the safety on UK sockets I was able to probe my mains supply with my multimeter with no problem, and if I can get test probes in there I am pretty sure people can misconnect plugs or worse get their fingers into them onto exposed live metalwork and potentially receive a very nasty or fatal shock. 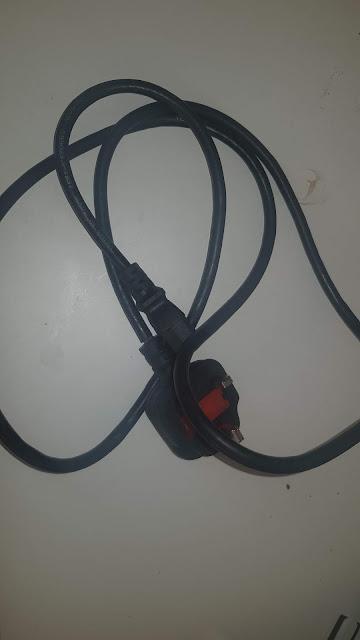 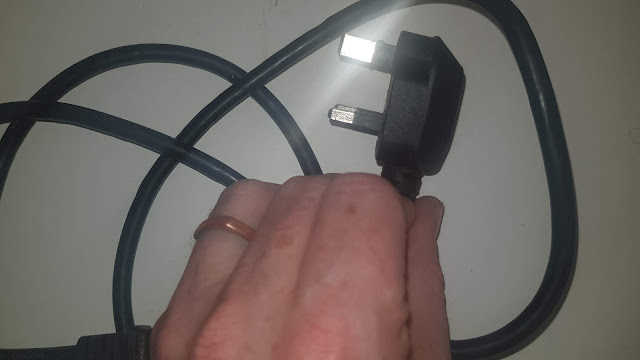 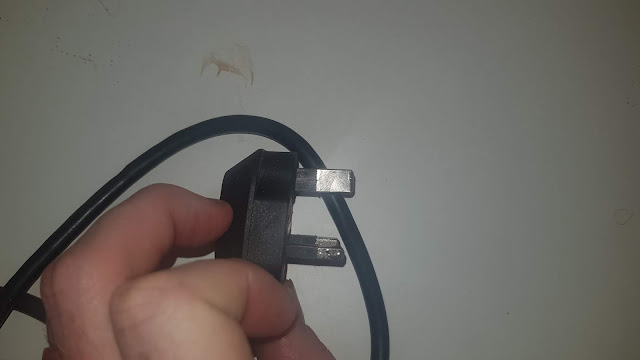 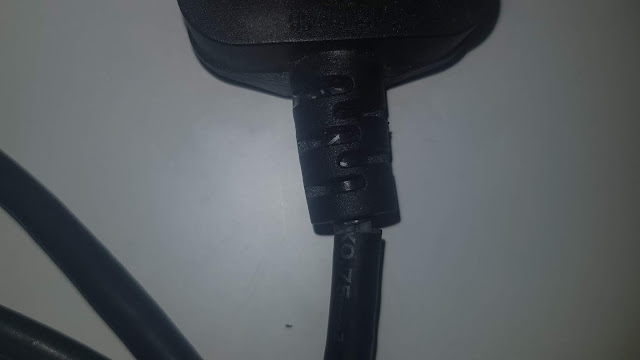 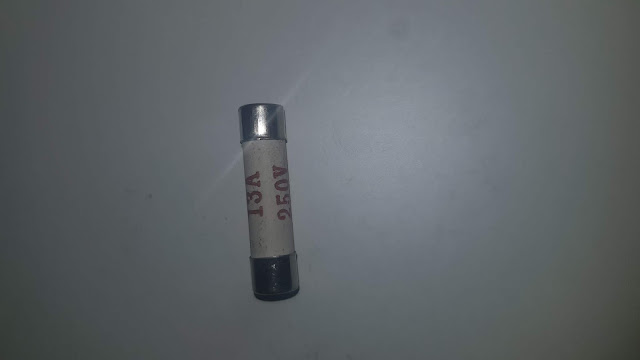 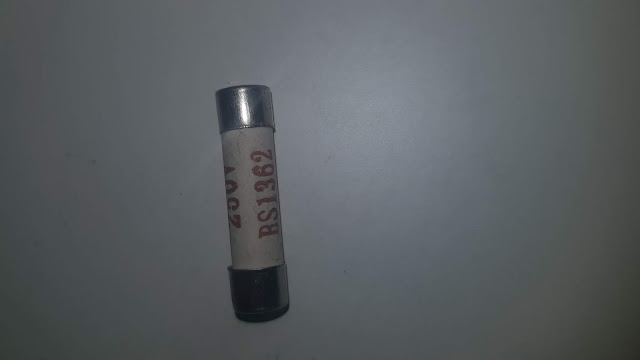 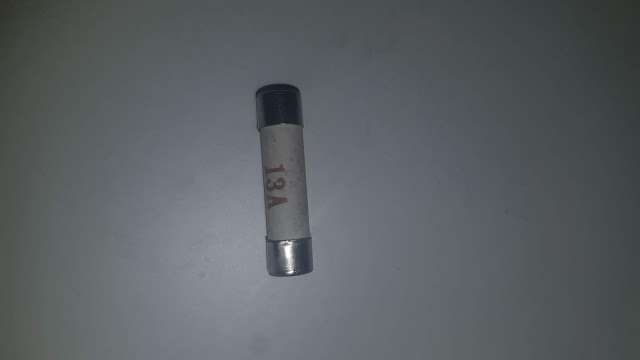 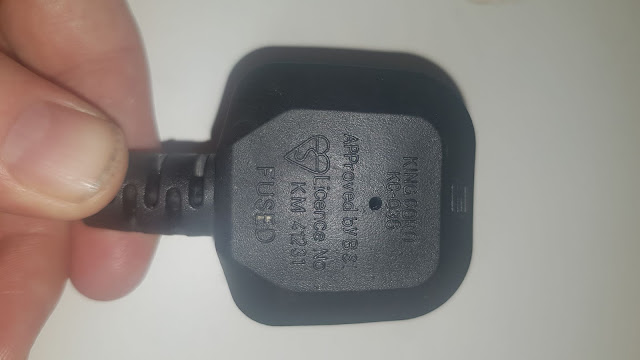 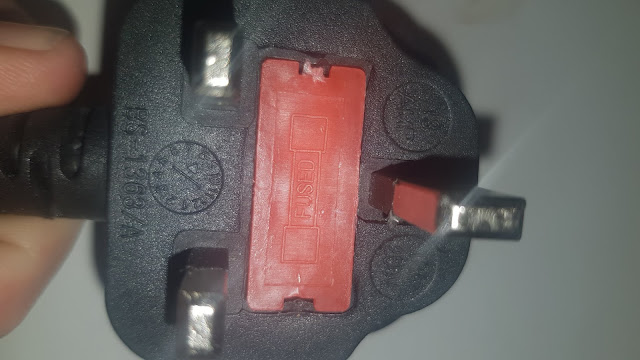 I have had this lead in my possession for a few years and questioned it from day one and shoved it in a storage box and only got it out for a video on it and to add it as an exhibit in the Museum of electronic and electrical deathtraps, so here are the issues with it in case the pictures aren't that helpful.

The lead feels very cheap and that counterfeit fuse cannot be seen without first popping open the fuse cover, which I did before and during the picture taking, this thing has the potential to cause an electrocution hazard and set your house on fire.

First a video on it 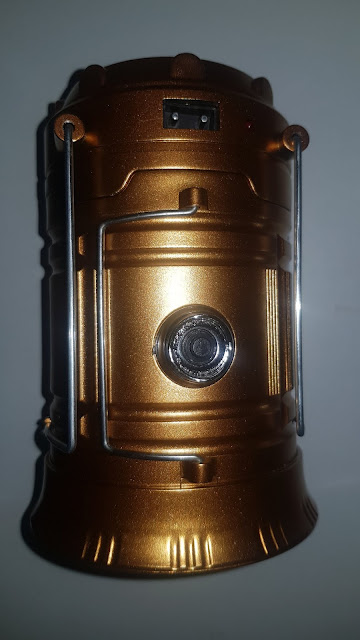 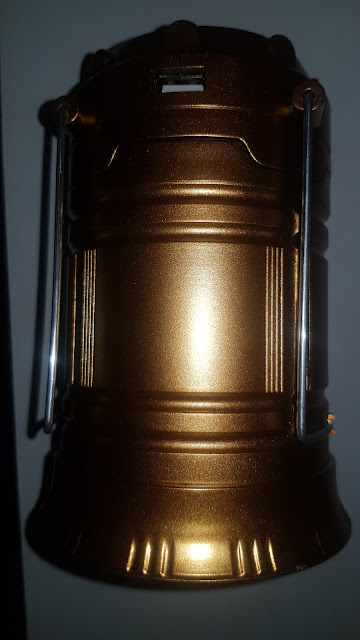 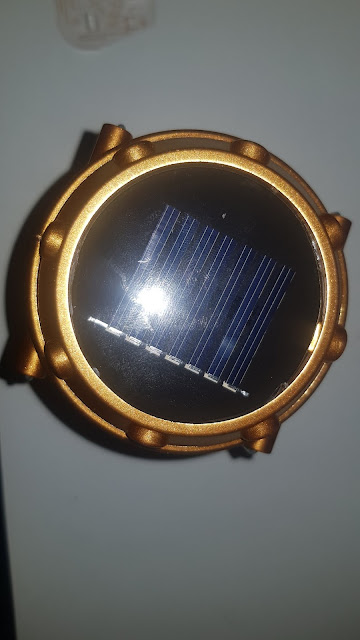 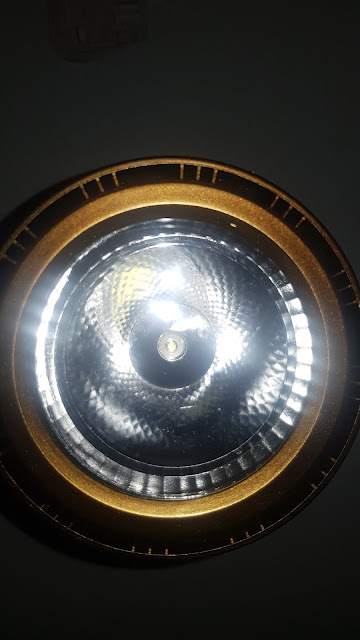 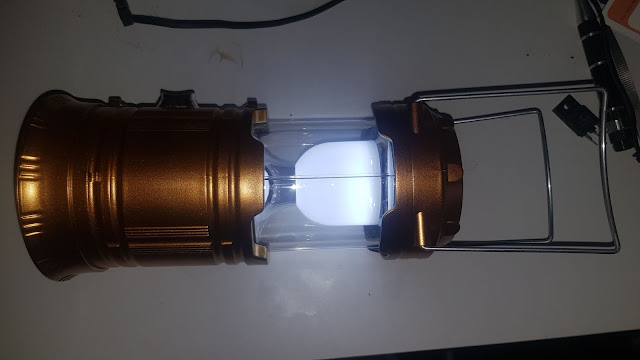 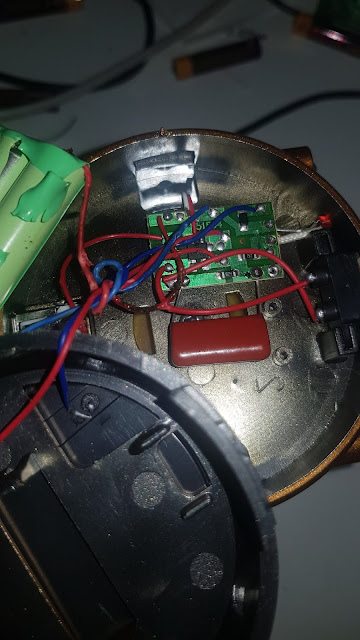 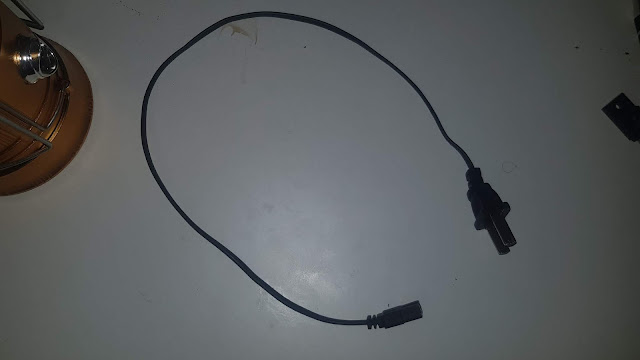 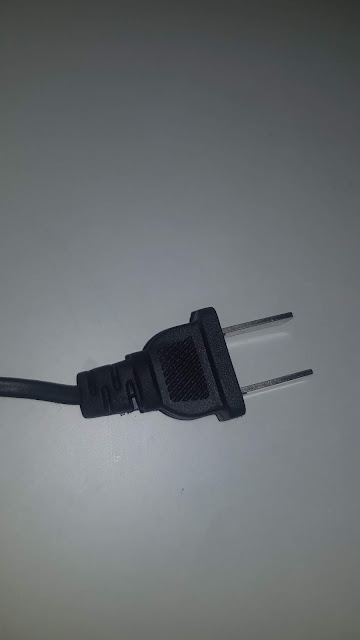 This is a camping lantern available cheaply from China via the likes of eBay, it has a solar panel and mains charging facility to charge some batteries inside that run the light or charge a phone via USB, the light is either the torch/flashlight style at one end or it telescopes out to become a camping lantern, however it is a deathtrap because it uses a capacitve dropper to charge the batteries inside and makes the USB port ground and shell live at mains voltage (and presumably all the other metalwork too, and in my case almost caught on fire during filming for the video above.

The power lead supplied with it joins it in the museum because it is very thin, possibly single insulated and made of the copper coated aluminium rubbish, and under fault condition on a UK mains supply would be a fire hazard in of itself, the plug on this looks American however it is not as American plugs actually have holes in the pins at the far end, this is presumably for the Chinese market though there are no type approval markings on it whatsoever so best to assume that it's even unsafe in China

Clive from bigclivedotcom calls these things "death Daleks" as they can certainly exterminate humans, this one I have can either via electrocution or burning the house down

First a video on it 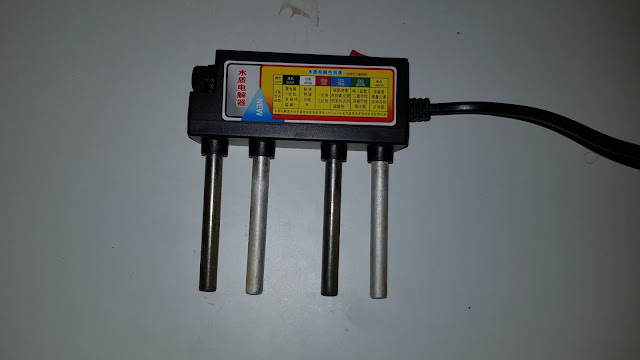 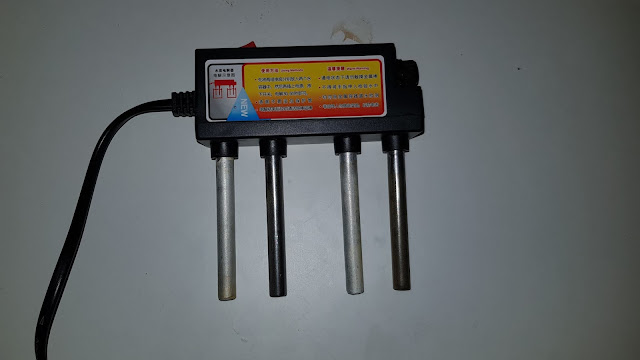 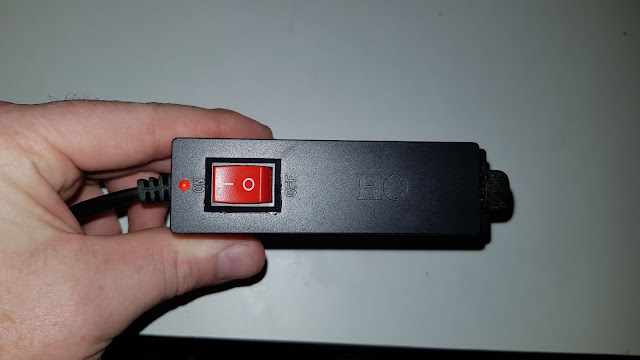 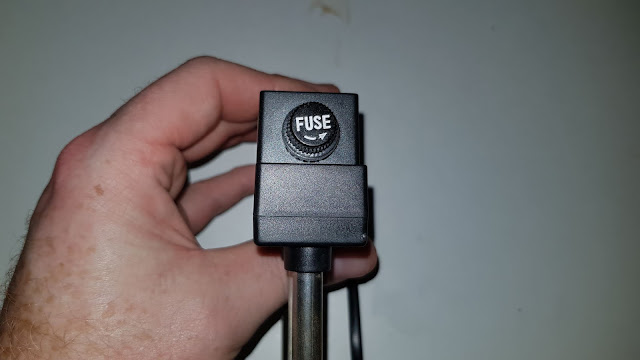 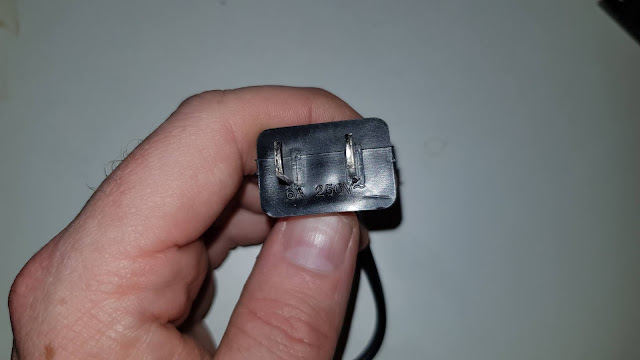 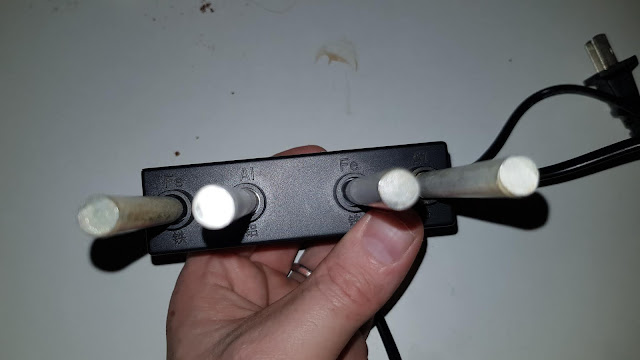 These nasty things are used by dodgy slick suited salesmen that pedal water filters by "testing" the tap water of who they are targeting against presumably distilled water, all they really do is leave a lot of rust in the water by passing a current (at rectified peak mains voltage) through it, all that is inside these things is a bridge rectifier which outputs to the 4 electrodes, the exposed electrodes present a shock hazard and the power switch only switches one pole and the plug as supplied is a nasty 2-pin Chinese plug allegedly rated at 6 Amps 250 Volts AC, which it probably isn't, as on my unit when I operated it for the video the cable got warm, I also noticed the cable use the obsolete wiring colour codes of black for neutral and red for live however with the unpolarised plug this would not really make any difference which wire went to what.